So you've installed Aegir, arrived at the home page of your installation and are waiting for the magic to begin. This section of the handbook describe how to use Aegir in the day-to-day management of sites and platforms.

On this page we'll introduce you to Aegir and how easy it is to use. In the pages that follow, we'll look in more depth at the three core entities in Aegir: sites, platforms and servers.

Once you've successfully completed an Aegir installation, you'll be presented with the homepage, titled 'Home'. The homepage defaults to the list of sites hosted on this Aegir instance. 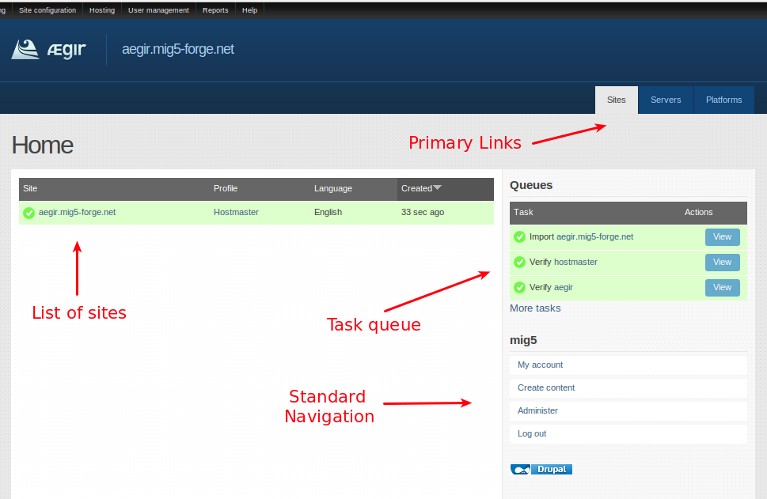 In a standard installation there won't be any sites listed here yet, other than the main Aegir site itself, which gets imported into the system during the installation. This is normal - Aegir even recognises itself as a Drupal site on your server, and to a limited degree is capable of 'managing' itself. Skynet is here!

At the very top of the screen you'll see the Admin menu, which you may recognise as a popular contrib module installed on many other sites, perhaps even some of your own.

This gives you access to all the normal Drupal administrative functionality, which is not normally required in everyday Aegir user, but it also does provide you access to the 'Hosting' administrative settings where you can enable features that ship with Aegir and make other configuration changes.

The Aegir project ships with a default theme called 'Eldir' which is the classic navy blue, simplistic functional interface consistent with the overall Aegir brand. Eldir has been specifically designed for Aegir - nonetheless it is a Drupal theme like any other.

Eldir has a main content section and a right sidebar. In the sidebar, several blocks are enabled by default.

The first is 'Queues'. Queues are Aegir's method of creating 'tasks' and putting them into a pool for the backend system to execute.

Two types of Queue exist in Aegir, though only one is enabled by default. These are:

The task queue that you'll see upon installation shows all the tasks that Aegir has recently run, or is about to run. It shows the last 5, but there is a link to see the full list of historical tasks. 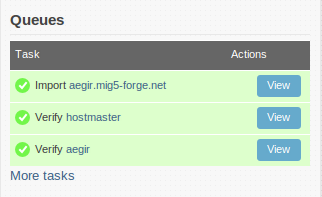 After installation there will be as many as three tasks in the task queue:

These tasks are kicked off during the actual Aegir installation.

It's worth checking the queues regularly to see that the Task or Cron queues are being run regularly. If not you may have a problem with the cron setup on your server - see the FAQ.

Underneath the Summary is the standard Navigation block in Drupal. 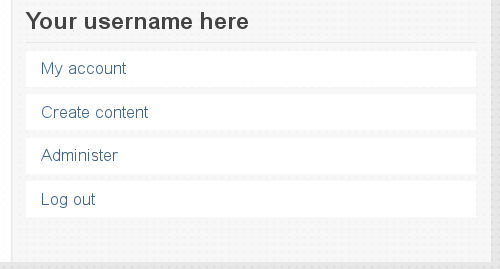 The main content body in the Aegir interface lists:

The main content area also is where nodes are viewable or editable, such as viewing more information on a site, platform or server, or editing/creating new entities of these types.

When clicking on a task's 'Run' or 'View' buttons, a modalframe dialog is loaded in the browser. This is to provide a fluid, attractive experience for the user without requiring them to leave the current page or node to perform operations on a site. When the action is performed on the task, the modalframe will close and the user will be returned to the page they were on when they clicked that button. 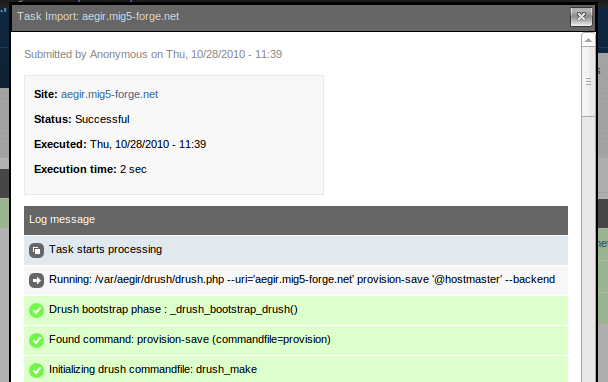 Working as the aegir user

It can be convenient to run commands as the aegir user, but it entails some security considerations. Because this special user can do things regular users cannot, such as restarting the Web server (and crashing it due to a misconfiguration), it should be considered root-equivalent. Basically, if users cannot be trusted with root access, they should not be trusted with aegir access either.

By default, the aegir user cannot log into the server directly via SSH. This is intentional (just as it is for root, by default); do not enable it. It is assumed that users with sudo access will become aegir whenever necessary. See section below for details.

Aegir systems run cron jobs through its Aegir user. As such, any code provided this way can be run as root, with no permission checking if there's any unintended privilege escalation.

Therefore, do not allow any PHP to be injected into your Drupal sites from the front-end Web UI. Modules such as PHP, Views PHP, and Computed Field allow this. While it's possible to rely on the front-end permission system to "secure" this functionality, we cannot endorse this set-up because we only trust back-end code.

The Apache Web server allows certain users, those with the ability to write its configuration (specifically log files), to escalate their privileges to the superuser root. As the aegir user does this, it is one of the reasons why we're assuming aegir is trusted.

While it could be argued that Nginx is the safer choice because it doesn't allow for this, we nevertheless recommend taking the above precautions with any Web server. It's always possible that additional means of local privilege escalation are yet to be discovered.

If you wish to allow other users on your system to run commands as the aegir user using sudo, without allowing them to use sudo generally, you can add the following two lines to your /etc/sudoers.d/aegir, or (/etc/sudoers using visudo):

If you want to allow these users to use aegir without entering a password, simply change the second line to this:

An alternative to allowing multiple users to operate as aegir is to use Provision ACL.

The default shell of the aegir user is /bin/false, so you have to make sure to become that user another way:

GNU Screen is a super useful window manager for the console. When launching screen you may get errors like:

You can get around this by running:

All in all this works nicely:

It can be convenient to put it in a little script as /usr/local/bin/suaegir, or add it as as a shell alias.